A quick fly by of a mountain on the Northern coast of a large island in Lyithdonea.

Just thought I'd show what I worked on today.

Don't mind the small graphical glitches during the video. It's just my cruddy laptop on the verge of death - specifically the graphics card (don't worry, I have my mod backed up).
Posted by Melchior Dahrk at 12:05 AM No comments: Darkelfguy has just recently begun a new series of Morrowind Modding Showcases on YouTube! Where he is providing quick synopses of mods popular and underrated, new and old.

He is looking for community participation in selecting mods to highlight in the weekly episodes.

Check out the latest episode at the channel: Morrowind Modding Showcases.
Posted by Melchior Dahrk at 7:12 PM No comments:

Email ThisBlogThis!Share to TwitterShare to FacebookShare to Pinterest
Labels: Announcements

The Future of Morrowind – A Discussion of the Greater Modding Community

And how we can all contribute

Morrowind is a game that all of us here love or, at the least, appreciate for various reasons: the world design, the characters, the lore, the music, the color scheme, the story, all of the above plus more, or maybe just the guars. The game was released in May of 2002; making it 12 years old and yet here we still are, keeping the game vivacious after all these years!

The community has downsized over the years, with players and modders alike migrating to newer games. But new modders still show up from time to time. This is especially true on the Nexus. Now the Nexus has gone through some ups and downs as far as quality is concerned, but I really think the site has shaken out into something worthwhile as many will agree. With the closure of PlanetElderScrolls and the loss of ElricM, our options for sites to download new mods from have been limited. In large part, we have been left with Nexus, Great House Fliggerty Downloads, or TESAlliance. Being part of the largest and most active repository of mods for the latest Elder Scrolls games, the Morrowind section of Nexus often attracts the most new modders, releasing their very first mod. Often they’re coming from Skyrim, experimenting with the Construction Set. They upload their mod and it gets a couple of comments, a few endorsements but several hundred downloads. While the mod they just released for Skyrim got hundreds of endorsements, downloads, and scores of comments. Now you’re thinking to yourself “of course, Skyrim’s player base is much larger because it’s the newest ES game”. And that is true, this isn’t a competition, per se. But the ratio of comments to downloads is often better for mods released for Skyrim than it is for Morrowind. There are plenty of small mods which slip through with not a single comment on Morrowind Nexus while still getting comparatively lots of downloads. That’s a low quality and quantity of feedback.

This lack of feedback is something I think we as a community need to talk about. I realized recently that I have a tendency to reserve all my comments on a mod for its WIP/Rel thread right here on this forum. But if I download a mod from the Nexus, which often doesn’t have a WIP or Rel thread here, I tend to think “that looks cool” and then just move on. Not really thinking much about the individual who made it. But I’ve thought back now, I remember I started modding around the shift from Morrowind Summit to PlanetElderScrolls. I remember the thrill of posting a mod, watching the download count rise, reading and responding to comments, checking the rating; and then checking back on a daily basis to see if there was any new activity. Getting feedback kept me going. Heck, it still does to an extent, but now I’ve shifted from PES to this forum to look for feedback on things that I create. But the fledgling modder at Nexus often doesn’t use this forum, they upload, they wait, and they may or may not get any feedback despite how many downloads they receive. Should we be surprised then when they decide to take their skills to mod newer games where the fan base is more vocal? Where they have the chance to be recognized?

The Morrowind modding community could use some fresh blood, and it’s out there, at the Nexus. But they are not being encouraged to stick around! I believe that we as a community need to step up our game and encourage these new modders by faithfully leaving encouraging remarks, constructive criticism, and detailed reviews. I myself have begun to go back and comment on many of the mods I have downloaded from Nexus, getting many responses back from authors who express an interest in making more mods for Morrowind. And I am not alone in doing this, Darkelfguy is the one who brought the finer points of this issue to my attention recently and he has been doing his part by leaving detailed feedback and reviews in the comments for many mods with active modders on the Nexus and receiving an immensely positive response.

With [a certain Skyrim mod concerning Morrowind] on the horizon, it is difficult to predict what the future of this amazing game holds, but we as its members can do our part to strengthen this community as a whole by commenting, endorsing, and reviewing mods which are still being made. Where are the Quatloos’s!? We’ve kept the game vivacious after all these years, but let us not slip into stagnancy!

Allow me a moment to cheer what I just said.

Email ThisBlogThis!Share to TwitterShare to FacebookShare to Pinterest
Labels: Discussion

Interview with a Monkey King


I had the rare opportunity to have a long conversation with a native of Tamriel's mysterious neighbor-continent of Akavir. He called himself King Jigra Mo and is a resident of what we know as the Thousand Monkey Isles. I took the effort to record most of the early, interesting bits of information before King Jigra descended into a long discourse on the "rightness of leftfootedness".


Screenshots »
Posted by Melchior Dahrk at 9:13 AM No comments:

After Moranar and Bahamut introduced new character models to Morrowind, I had a change of heart over the NPCs in my mod. Before I was going to just keep it vanilla and the Chimer were going to have stock head meshes and body meshes and have textures based on the vanilla resolution. However, I just finished updating them to use Robert's body and Westly's heads. If Robert's body models end up being too problematic due to incompatibilities with BB meshes, it would be a simple thing to downgrade, but I don't intend to. Moranar has already made a patch for Better Clothes for Robert's body. And a patch for Better Armor is in the works so I do not have any concerns over major incompatibilities.

But before I ramble on forever, take a look at the new Chimer and let me know what you think! Nothing too flashy, I tried to make them look like Aldmer with a splash of newly developing Dunmer culture. I haven't yet decided if the men should get goatees... 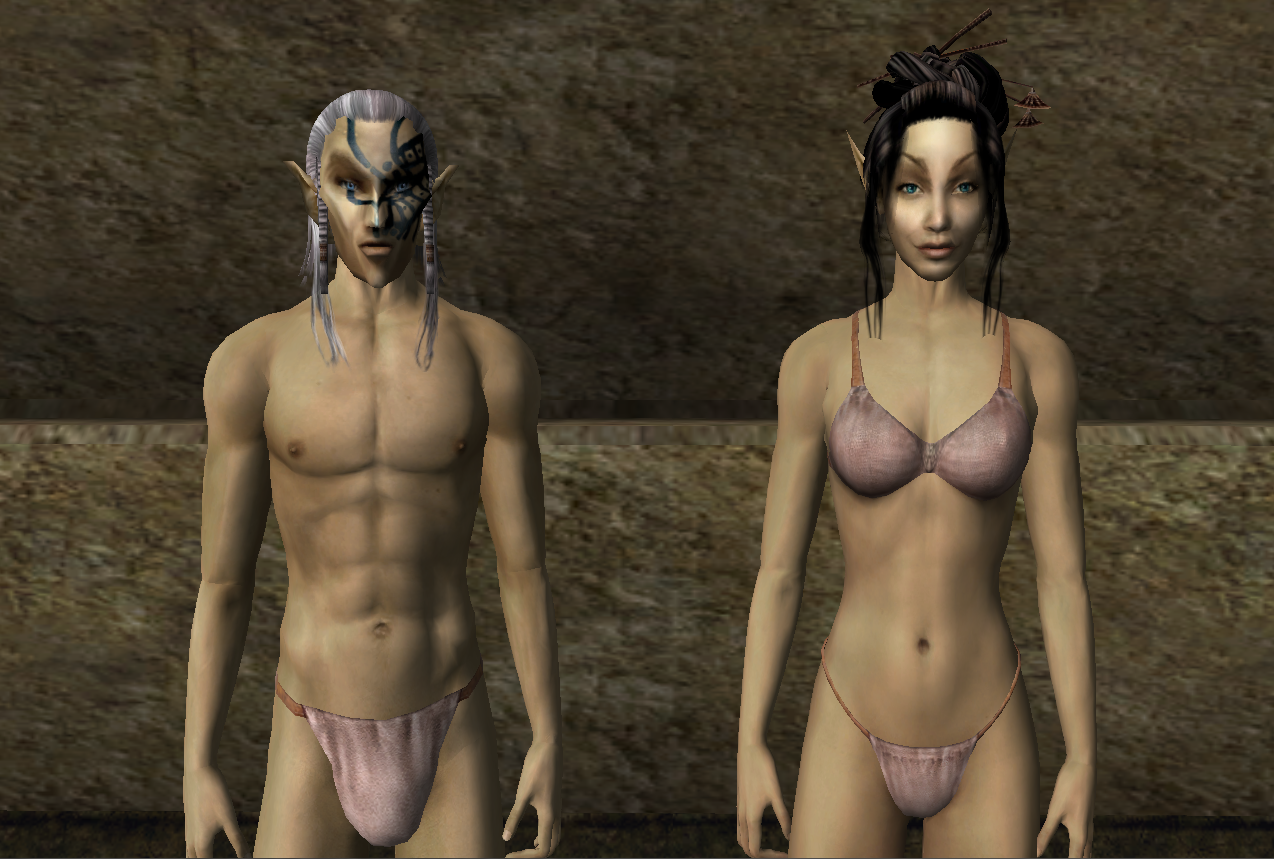 As I get closer to a beta release of Lyithdonea, the creatures players will encounter there has become one of my focuses.

The Sigil Golem is a shrine guardian construct of Daedric origin which can be found in the Daedric shrines in Lyithdonea. He has a sigil stone for a face and doesn't take kindly to robbers trying to mess around in his ruins. I've created a short video to showcase the creature which you can view below!


I think he turned out fairly well, but you'll be able to see him for yourself soon since I'm working towards a beta release this Spring!

I haven't posted on my blog in a while, so I thought I'd try and pick up my use of it again.

For today, I've got Zainus Lagoon. A location in my progressing mod, Lyithdonea: The Azurian Isles. Not much to say about it, really. It's a location that existed before, I just did some touching up today.

In addition to getting the exteriors cleaned up, I've been spending my time cleaning up the resources for my mod: putting files into unique sub-folders, commonizing my ID method in the CS, and removing a handful of resources I won't use. That's been a bunch of work, but it's a necessary exercise.

But without further dithering, here are the vistas I captured while exploring the lagoon. 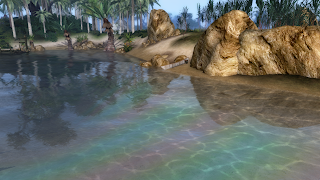 Screenshots »
Posted by Melchior Dahrk at 10:36 PM No comments:

A while back, I found a large group of old mods which I have never finished. They range from a cozy room for the Temple Patriarch to a sprawling desert occupied by nomadic Khajiit. I wanted to see how they all looked in game with MGE shaders. The nostalgia flooded in as I explored my own creations. Keep in mind that these were made over 6 years ago, contemporary with and older than my Leijing Hill mod; it's too bad I don't still have the ones which are even older!

I took some screenshots of my exploration which you can see below. I've also given short explanations for everything. I hope you enjoy this little trip down my memory lane!

This mod added a legion garrison to Khuul. This mod was interesting because I made it before I knew how to edit or create pathing grids. So I tried to corral all the NPCs using invisible barriers like the ones used during CharGen. It made navigating the narrow streets pretty tricky.

Screenshots »
Posted by Melchior Dahrk at 9:57 AM 6 comments:

Email ThisBlogThis!Share to TwitterShare to FacebookShare to Pinterest
Labels: Miscellaneous

It's been ages since I've posted on here (I think that nearly a year counts as at least an age in blogging). So I thought I'd post an update for some of the more recent things I've been working on in this time frame. I've released a plethora of little mods, started a couple more large projects, and continued on the old projects. I might have modding ADD.

So let's see what's up:
Screenshots »
Posted by Melchior Dahrk at 7:37 AM No comments:

After a long hiatus filled with college and a lack of inspiration. I've finally picked this project up again, and I am loving it just as much as I did before!

I've made a decent amount of progress in just 4 hours or so and I wanted to share so that people know that I'm still progressing with this, and making some realistic downsizes to the project such as removing one major city which was pointless and wasn't going to work well with the game engine anyway.

So here's the great House Azura's magnificent temple built to rival White-Gold itself! (along with some scenery I've been working on; made to look well with MGE and without).

The poor fps is just my laptop not running the game well. That's the FPS I get everywhere with MGE active :P

Melchior Dahrk
I currently spend most of my modding time with my expansion mod, The Azurian Isles. So just about everything seen in this blog will be related to that WIP.